Viewed from the port below the town, the candy coloured weather beaten buildings of Sciacca expand upwards against the gentle slope which overlooks the Mediterranean Sea. The port of Sciacca still remains one of the most active commercial fishing hubs in Italy. The docks are a cacophony of sights and sounds as weathered fisherman, with their deep tanned faces and rubber boots, unload bulging crates of scampi from their boats and haul them on to the pavement below. Every day, during the early hours of the morning and late into the golden hours of the afternoon, the pescatore wave their prized catch while local chefs and residents try to outbid each other for the best of the fresh bounty. The spectacle is not one to be missed when visiting this ancient town, especially during the late afternoon when the last golden rays of the setting sun cause the buildings to glow like fire and transform the limpid waters into a deep and luminous carpet of gold. This must be the scene that Sicilian writer Leonardo Sciascia witnessed when he wrote his book The Wine-Dark Sea. 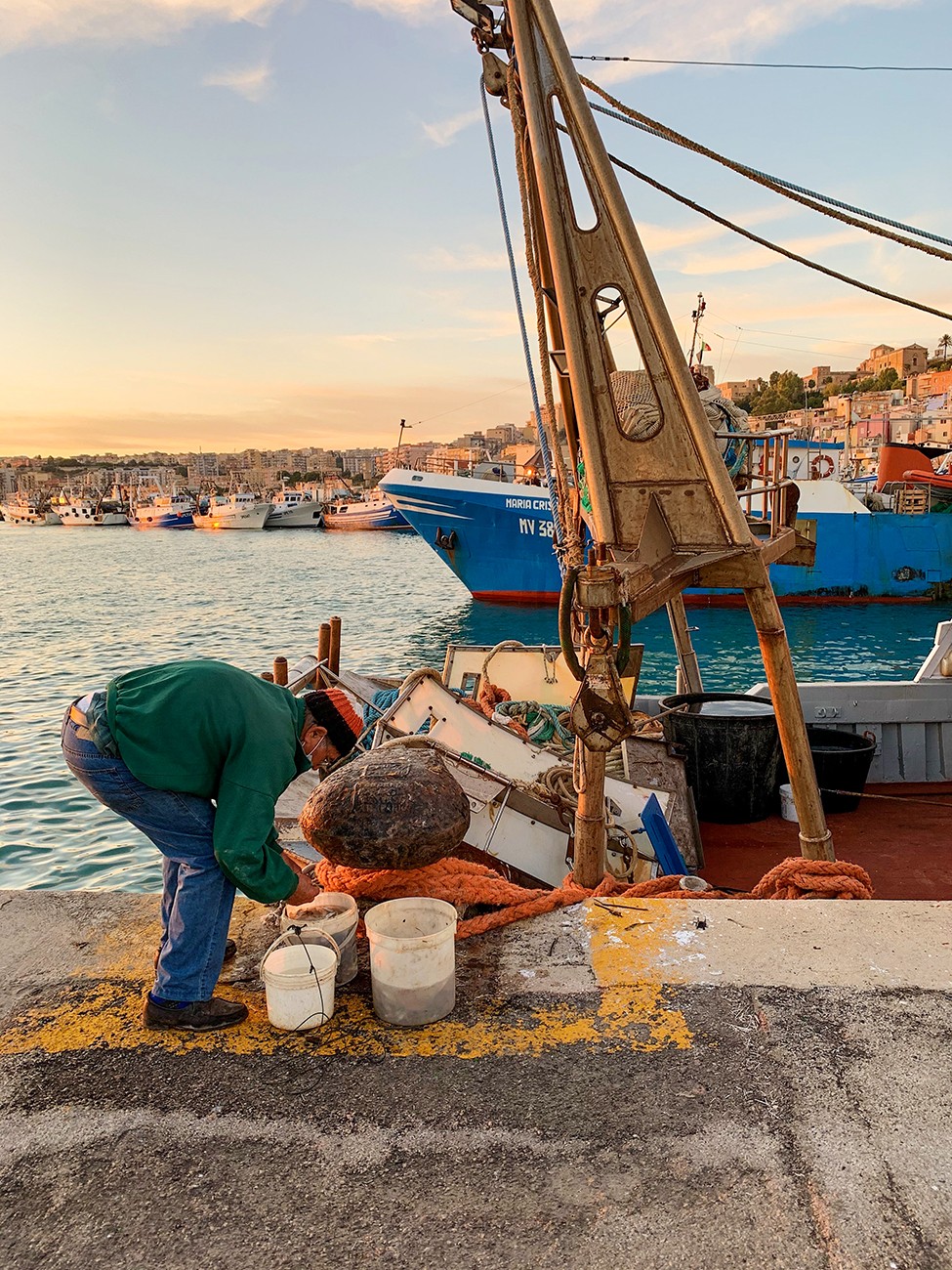 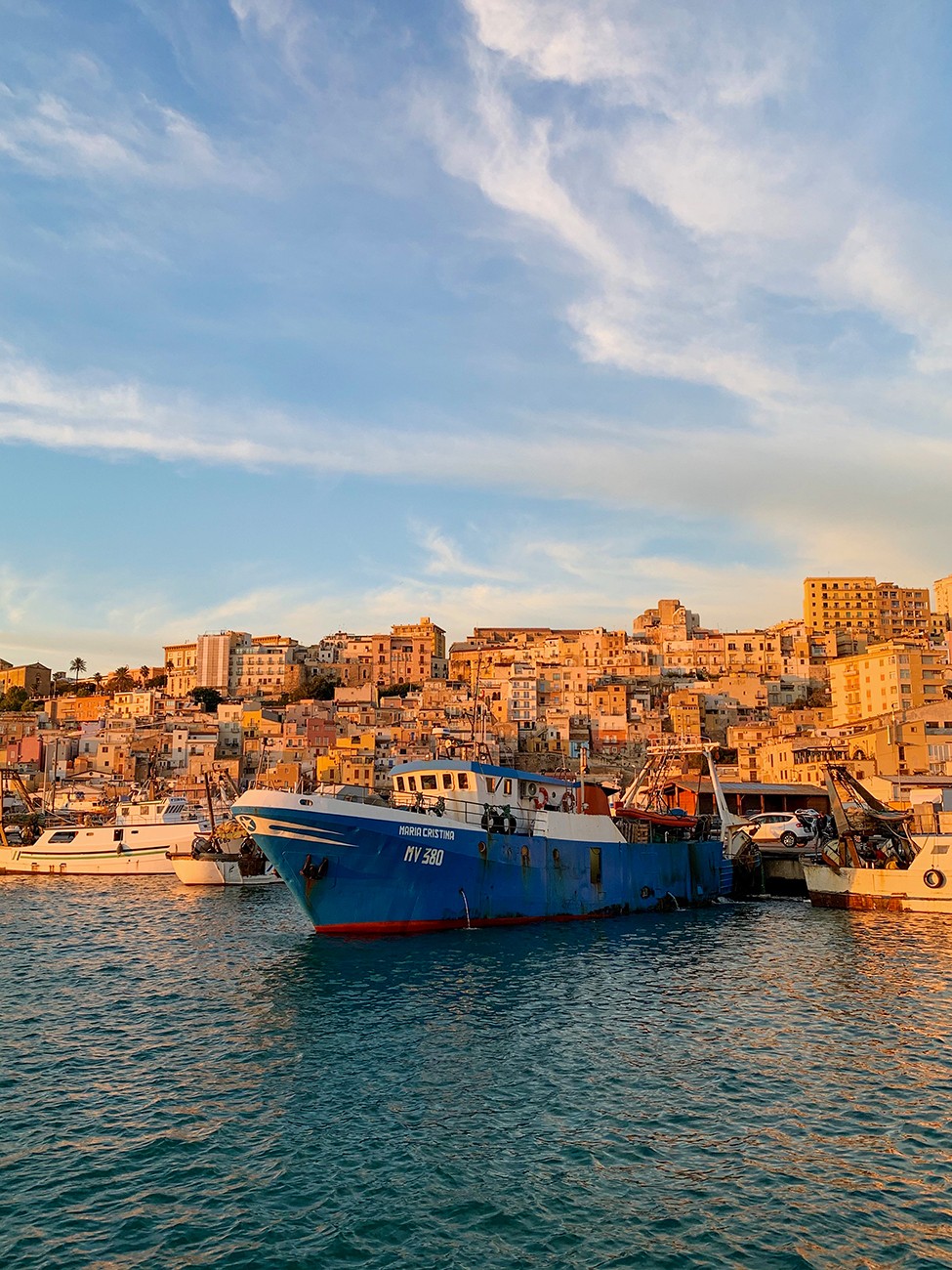 With an abundance of locally caught fresh seafood it is no surprise that the town of Sciacca boasts a small yet impressive array of local cuisine. This is a town that is not afraid to showcase its passion for food. From sophisticated restaurants where dishes are served with creative flair to the more rustic trattorie with their home cooked meals accompanied with hefty carafes of heady Sicilian house wine, many are worthy of a visit. I have dined at quite a few of these establishments and immensely enjoyed the variety of meals on offer. To eat in Sciacca is, for me, to feel euphoria and peace. 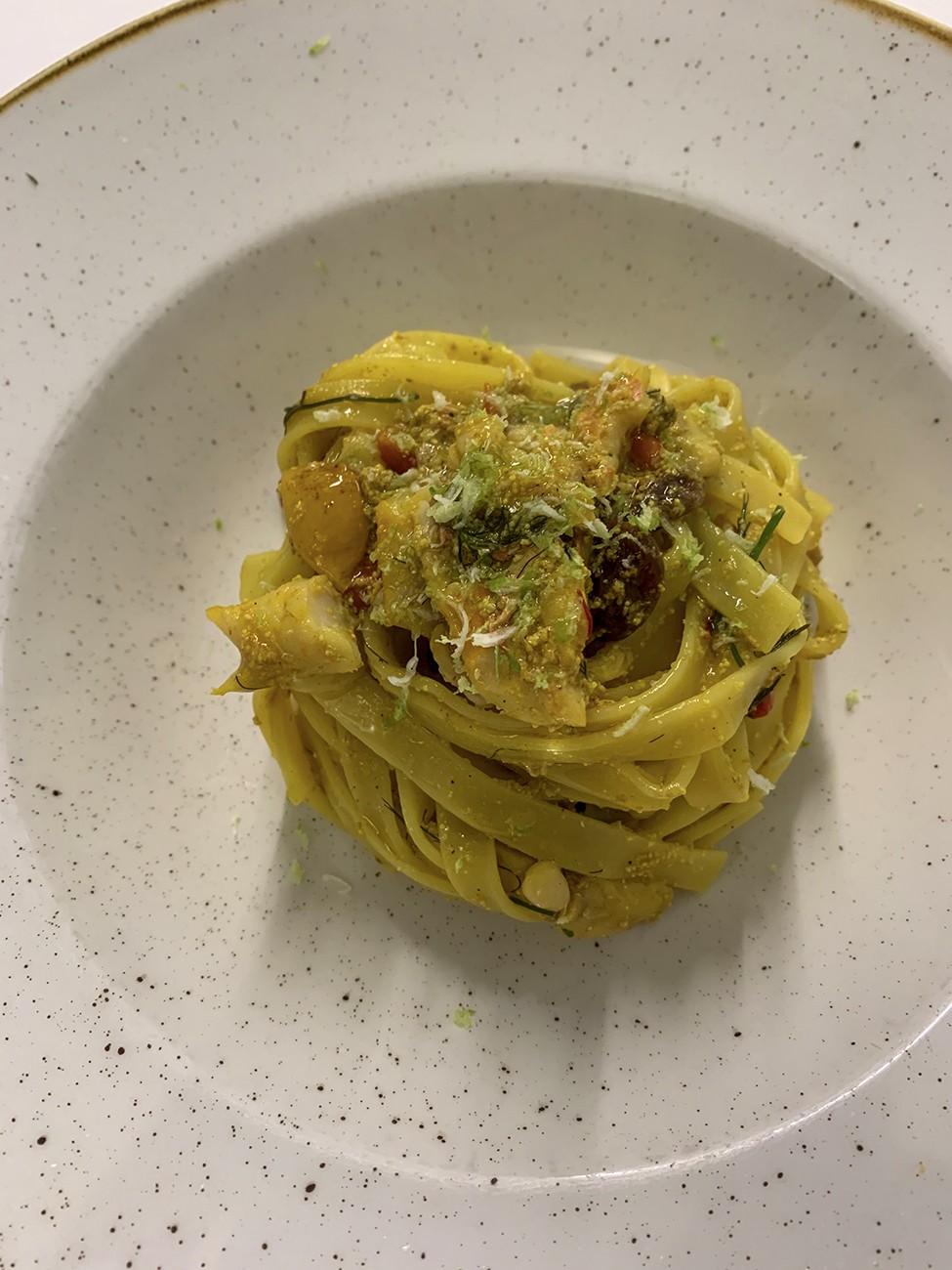 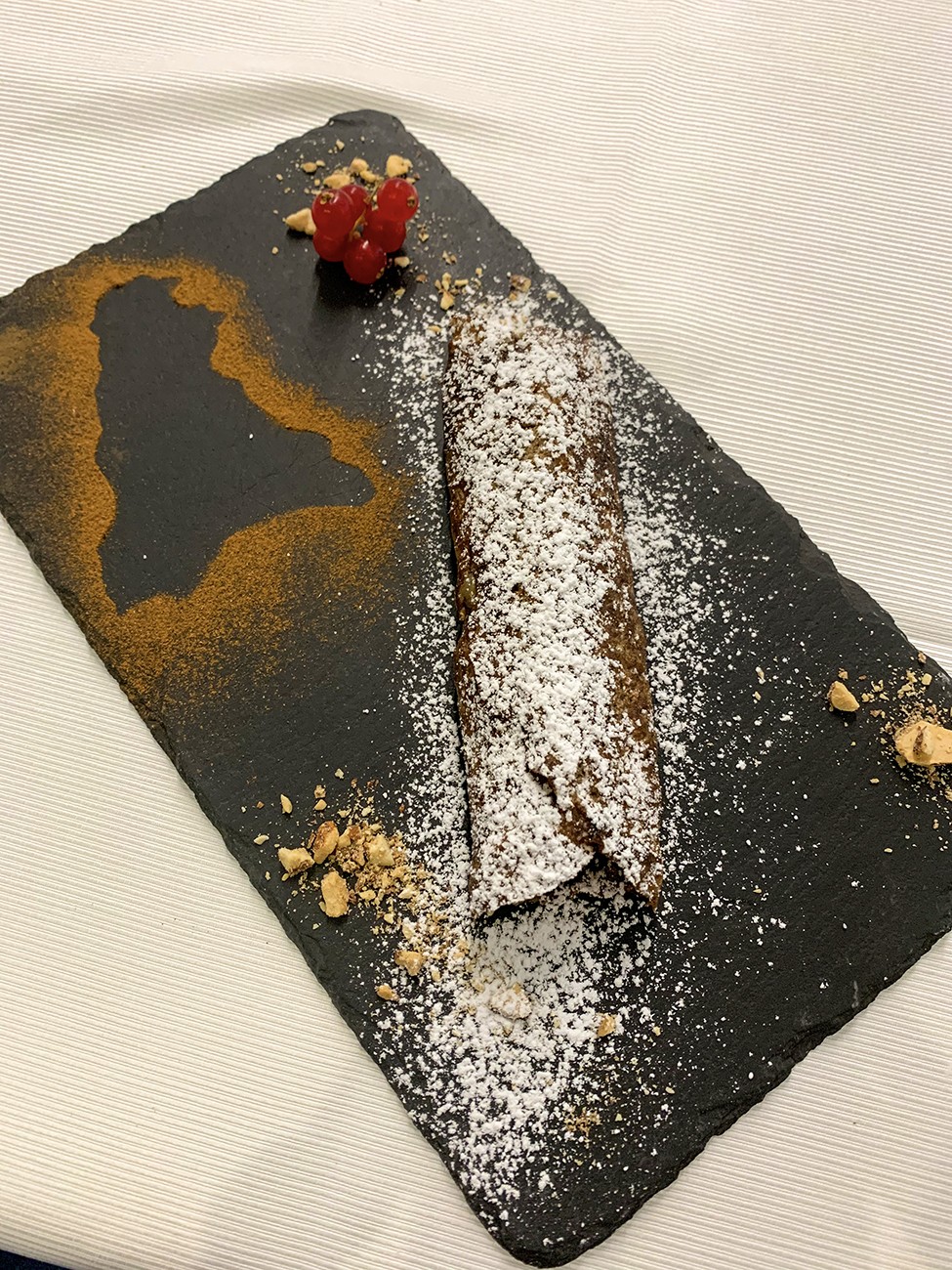 Of course much of Sciacca’s traditional cuisine is based around seafood, such as the deliciously simple Misto di pesce in tegame con pomodoro – mixed fish cooked in a pan with tomato, which is a relatively simple dish but is elevated by the use of fresh, locally caught fish and sweet, vine ripened tomatoes. As with much of the cookery of Sicily, here the simplicity of the recipe allows the quality and freshness of the ingredients to shine. Another local favourite is the Padellata di Gamberi, a large pan of fresh sauteed prawns dressed in olive oil, garlic, and lemon- delicious! Despite seafood taking centre stage here in Sciacca there is no escaping the Sicilian passion for all things sweet. It wasn’t until my fourth visit to this port town that I discovered the decadent little dessert L’Ovamurin, a soft and delicate sweet pastry rolled and stuffed with cream, chocolate, and almond pieces. They were originally created by the saintly hands of the nuns of Sciacca and known affectionately as the ‘Summer Cannolo’ because cream substitutes the traditional ricotta, which is not produced during the hotter months. This mouth-watering dessert owes much of its creation to the Arabic influence with many of the ingredients having roots in Middle Eastern flavours such as cinnamon, vanilla, and of course sugar. Some say the name translates to ‘Uova Moresche’, meaning Moorish Eggs, for its lavish combination of exotic ingredients. 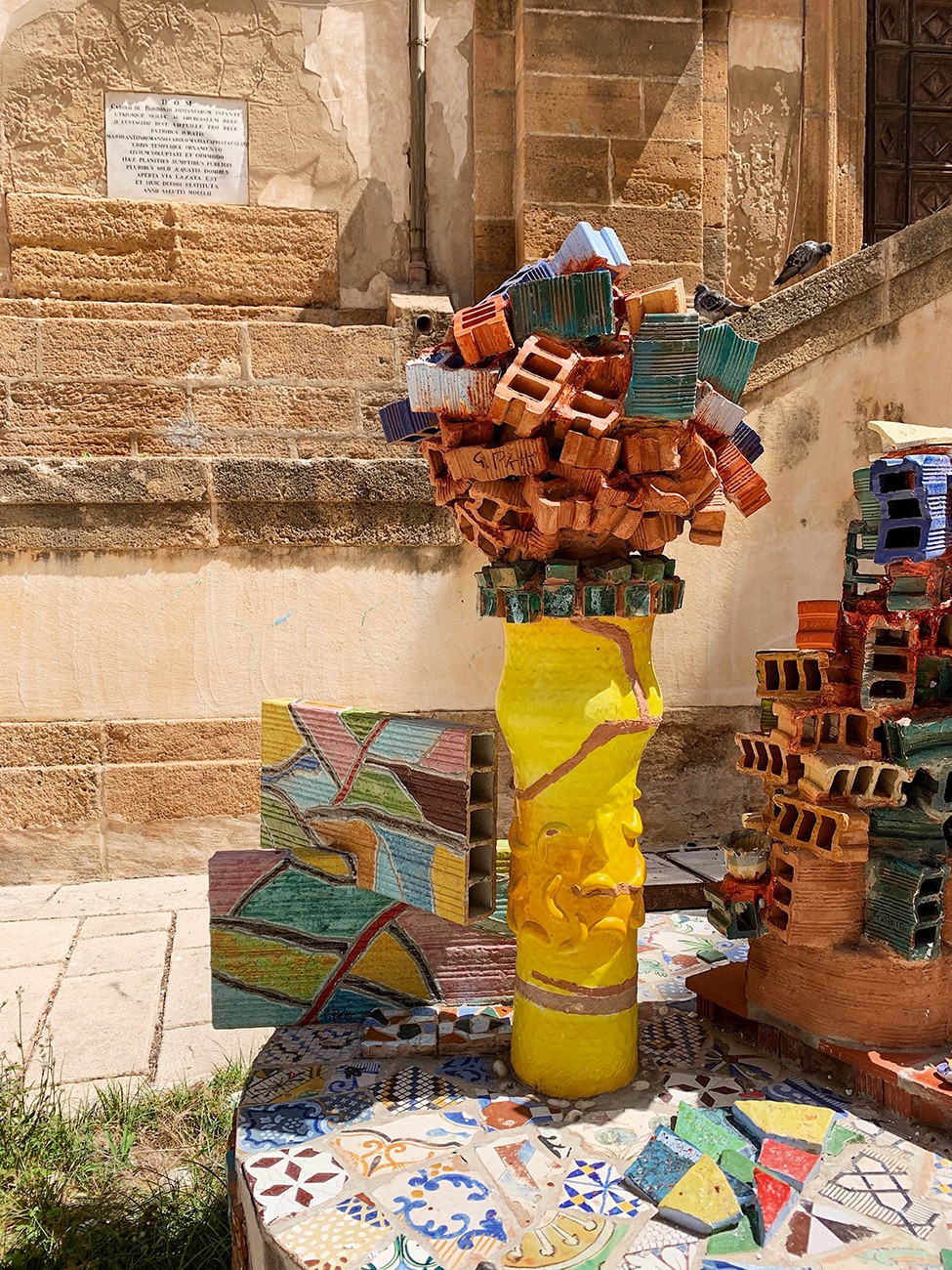 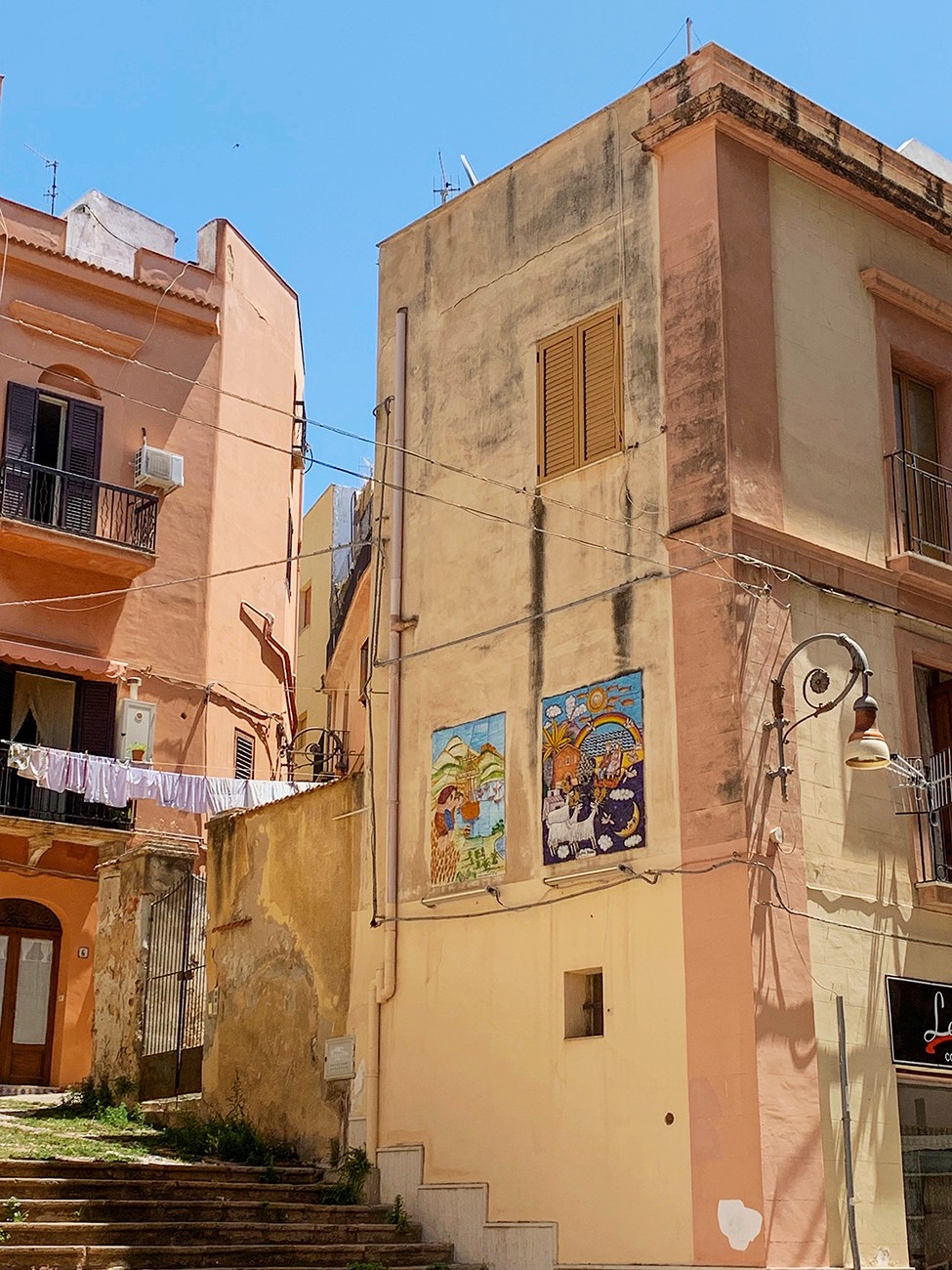 Winding your way up through the vertiginous, narrow streets leading to the heart of the old town you will notice that the sharp, pungent smell of the sea is quickly replaced by the distinct aroma of freshly ground coffee beans and saccharine dolci whose heavenly perfume wafts from many cafes. However, no matter how strong my urge to overindulge may be, there is nothing that can lure me away from the assortment of small, cavernous ceramic shops selling their richly decorated and hand-crafted wares. Sciacca is a town which not only appeases the lovers of food, it also, very temptingly, satiates the aesthetic appetite. There is never a time when I leave empty handed without adding to my already expanding collection of Sicilian ceramics. One research trip to Sicily I stumbled across a glorious little studio-cum-shop tucked un-assumedly along one of Sciacca’s back streets. My tour partner Ciro was more intent on satisfying his hunger than he was concerned with fossicking through bits of clinking pottery and he was most relived when the metal roller doors were pulled down securing the front of the shop. Luckily the name and phone number of the artist, Eugenio Sclafani was prominently displayed and fortunately for me Ciro made an appointment for later that day. After feasting on an array of perfectly prepared dishes at one of my favourite restaurants Hostaria Del Vicolo, we returned to meet Eugenio at his shop. From the moment I entered this magical space I was overcome by the brightly coloured, intricately made pots. It was a ceramic lover’s paradise filled to capacity with huge, terracotta bowls adorned with abstract fish, and whimsical sculptures decorated with cubist inspired motifs. 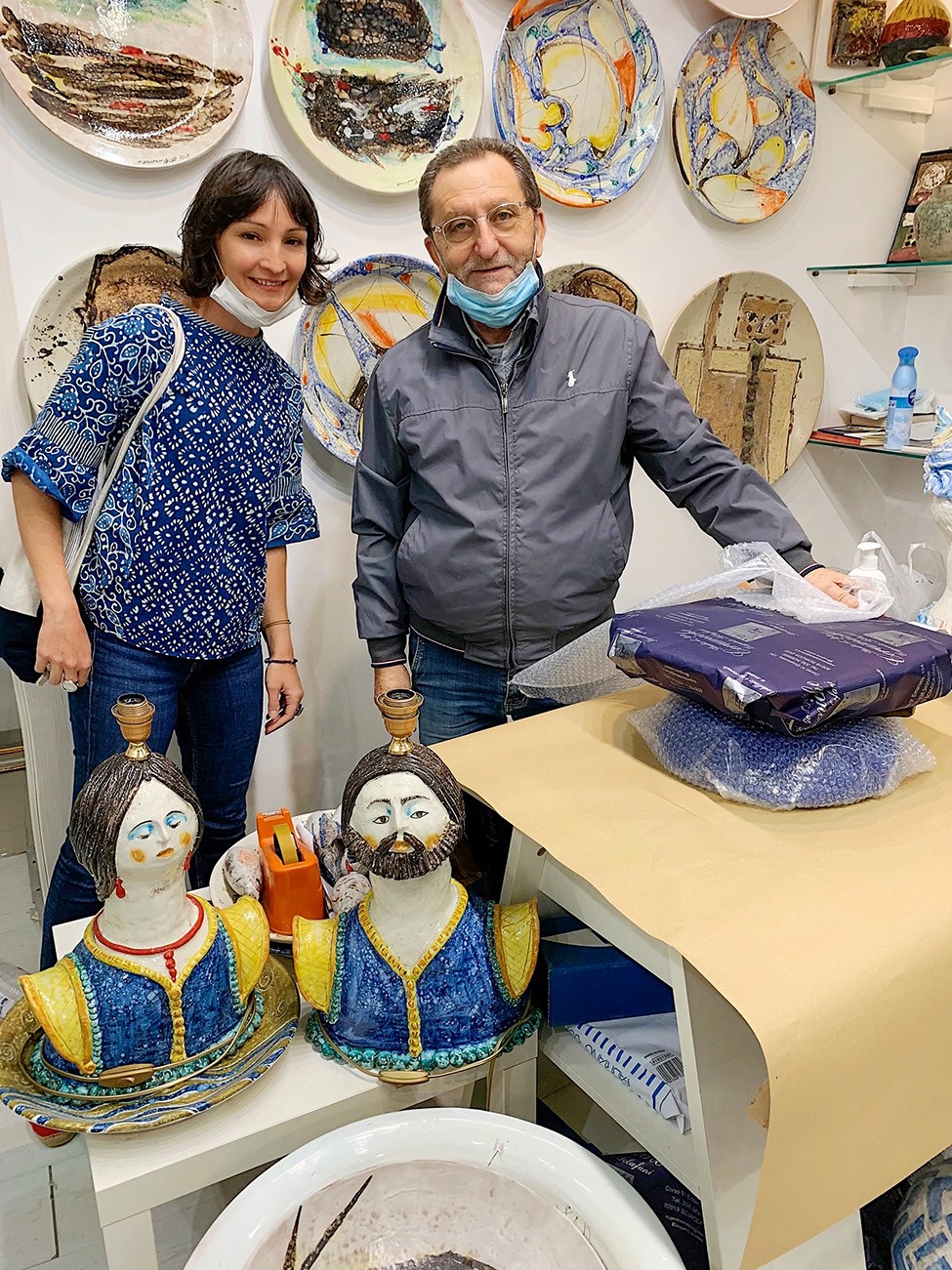 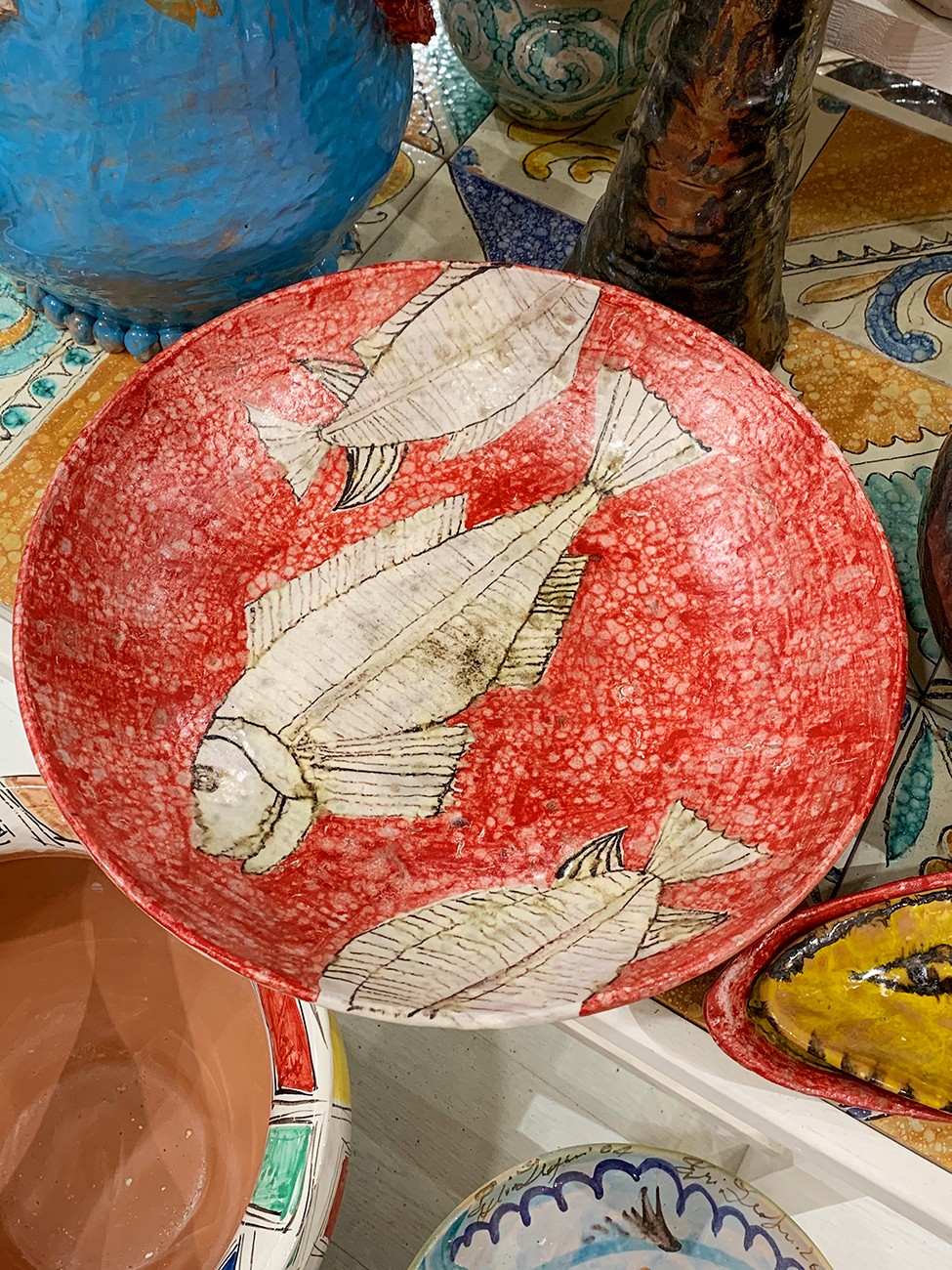 Sciacca is a veritable treasure trove of both traditional and contemporary ceramics, gastronomic delights, and picturesque architecture. Walking down the Corso Vittorio Emanuele there are a myriad of breathtaking baroque buildings lining the street with glorious glimpses of the sea below. Sciacca is a beautiful town which is now gaining attention from tourists; however, this is essentially a town for the locals, it is a place where people live, work, and enjoy local life, and is utterly without pretension. As you wander through the tangle of backstreets, you will be amazed by the ornately decorated ceramic tiles which adorn even the most basic of structures. Every piazza is furnished with a plethora of dramatic ceramic sculptures hand crafted by the local artisans.

Stumbling across a small vicolo sprouting from one of the major street arteries there is a small community who have embellished every surface of their homes with oddly shaped shells, brightly coloured glass fragments, and broken bits of old ceramics. The result is mesmerising, and the overall sense of harmony and community spirit will evoke an emotional response akin to observing even the most refined of artworks. This naïve, almost childlike display remains as a testament to the residents’ sense of place – a dedication to the pride felt for living here in a town rich with artistic tradition. Sciacca performs a visual treat, but steadfastly remains one for the enjoyment of the locals, and if a few enthusiastic, tourists catch a glimpse, well, that is definitely a bonus. 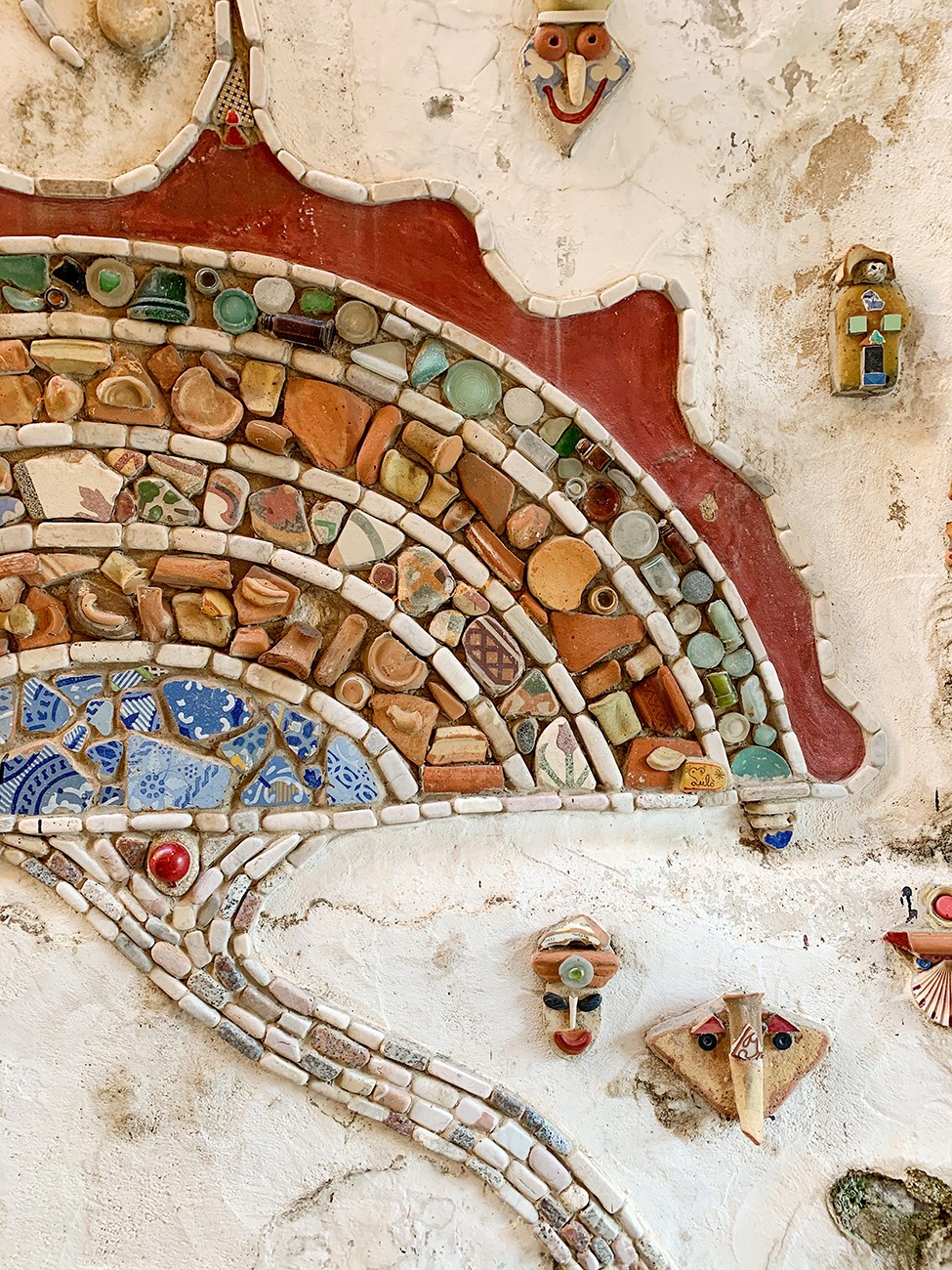 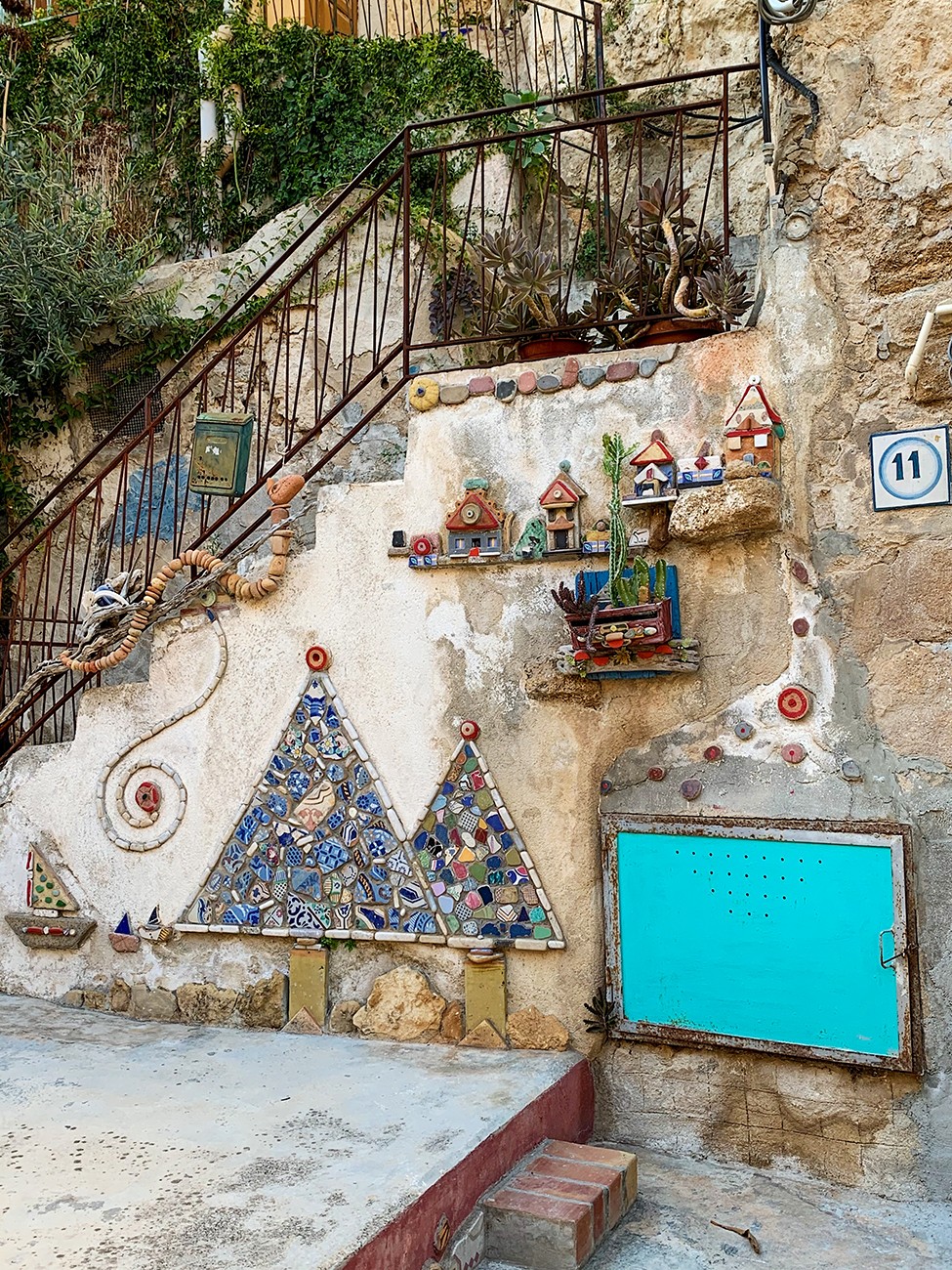 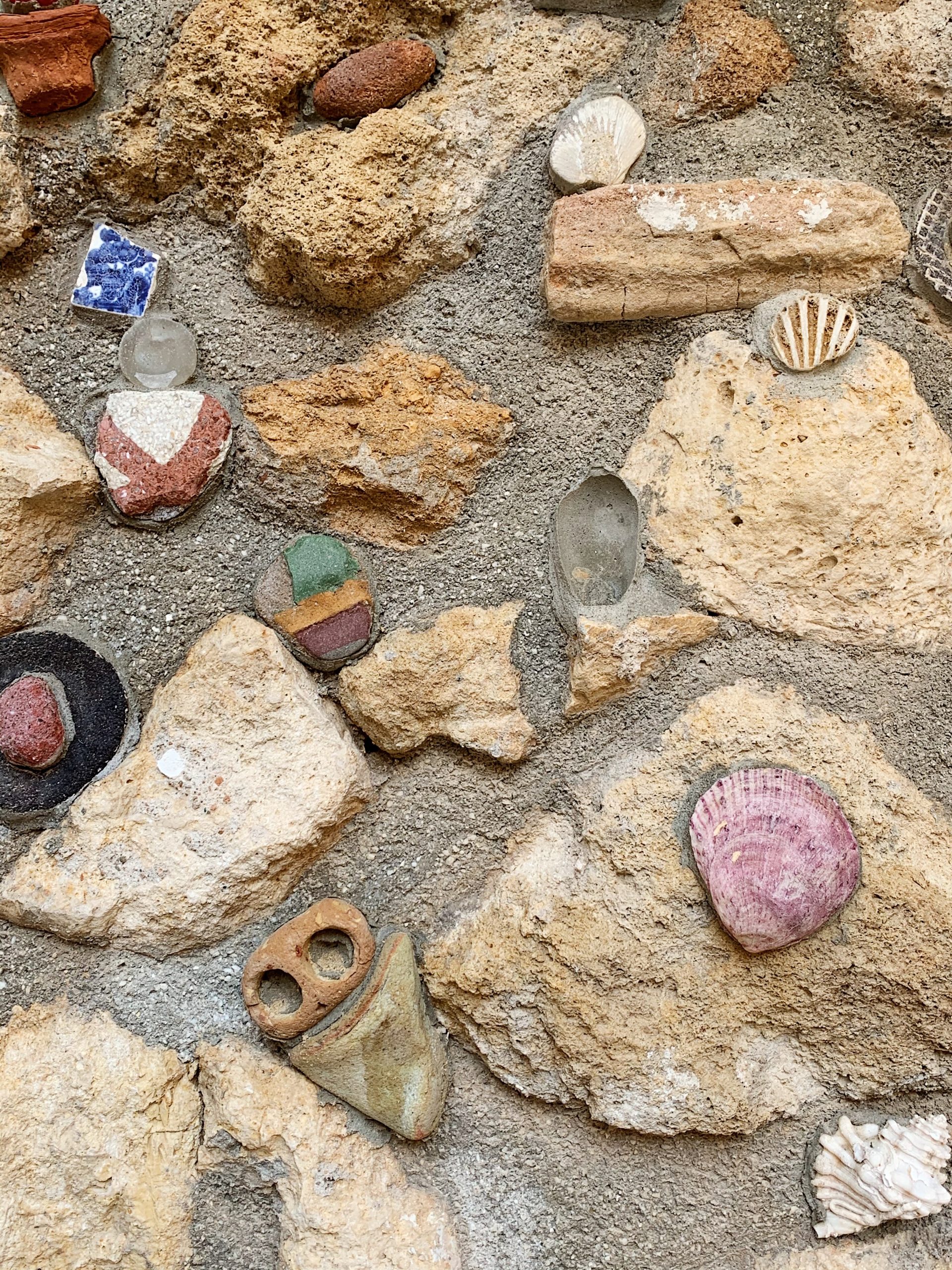 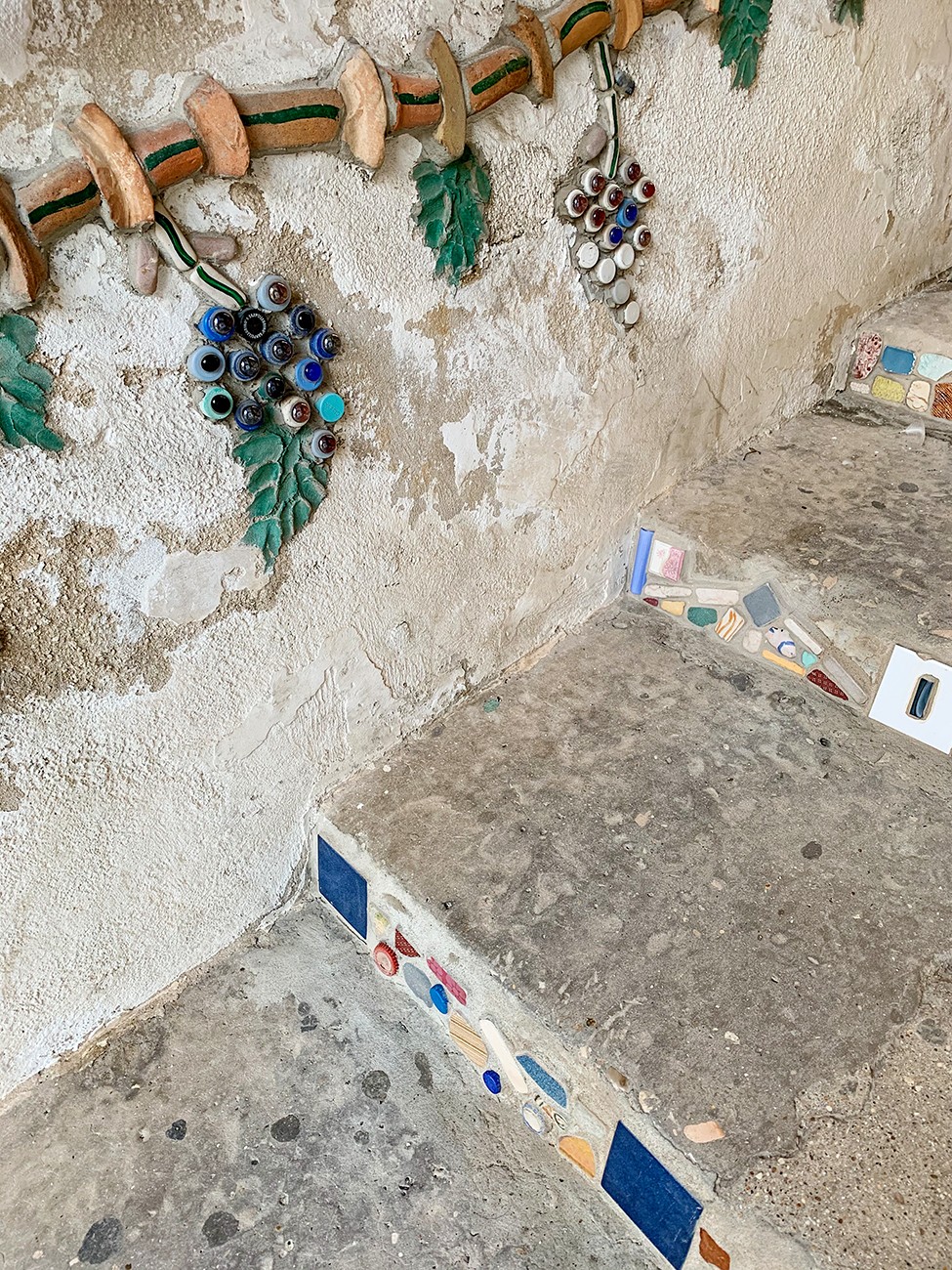